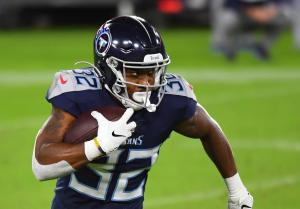 Show highlights include Evans and Chris Puckett facing off in a “Madden” showdown, and Evans discussing his NFL experiences and gaming passions.

Show highlights include Evans and host Chris Puckett facing off in a “Madden” showdown, and Evans discussing his NFL experiences and gaming passions

IRVINE, CALIFORNIA, UNITED STATES, March 24, 2021 /EINPresswire.com/ — A competitive titan on and off the football field, Darrynton Evans, running back and kick return specialist for the Tennessee Titans, is also an avid gamer, music producer, rapper, and social media influencer.

Evans enjoys playing and streaming on Twitch his favorite games including “MaddenNFL21,” “Call of Duty: Warzone”, and “NBA2K21” with his friends, fans, and fellow NFL stars. He’s also a formidable #sniper in Call of Duty as well. Check it out here — https://www.tiktok.com/@itzliveee/video/6939976830799727878.

Some of the topics covered in Puckett’s engaging interview with Evans include:

• how it feels to be part of the NFL’s most feared backfield with teammate star running back Derrick Henry,
• his favorite running back to watch before he joined the NFL,
• his excitement about scoring his first NFL touchdown last season,
• expressing his joy on Twitter about his former school Appalachian State ending its 21-year NCAA basketball tournament drought with its first Sun Belt
Tournament crown,
• what were the most popular video games in his college dorm,
• how talent in video games runs in the family with his cousin becoming a pro esports player,
• growing up playing “Grand Theft Auto” on PlayStation and what he wants to see in the new upcoming version,
• why he wants the NCAA to bring back its college football video game,
• how he felt when he heard his name called on draft night and the moment he realized he had made it to the NFL,
• what is his “why?”,
• and where does he see himself in 10 years.

In an exciting gameplay show finale, Evans and Puckett face off in a “Madden” showdown with Evans playing as his digital self in the game. Don’t miss all the gaming fun and Evans’ and Puckett’s informative game reviews.

You can watch the entire show, which aired on March 23, here:
(https://youtu.be/ztwFK0rTZU8 ).

You can follow Evans’ gaming exploits on Twitch at Twitch.tv/itzLiveee, on IG: @itzLiveee, and TikTok: @itzLiveee.

Drafted by the Titans in the third round of the 2020 NFL Draft (93rd overall), Evans showed flashes of promise in his rookie season for the league’s top-ranked offense. After being placed on Injured Reserve after suffering a hamstring injury in the team’s 42-16 Week 4 beatdown of the Buffalo Bills, Evans got back into action late in the season to solidify himself as a solid backup to Henry heading into the 2021 season.

Overall, Evans rushed 14 times for 54 yards and caught two passes for 27 yards and a touchdown across five regular-season games for the Titans. He rushed for one yard in the Titans’ playoff loss to the Baltimore Ravens.

Evans comes from an athletic family. His father, Darryl, was an All-American baseball player at Bethune-Cookman, his uncle played for the Philadelphia Phillies, and his mother was a track athlete.

“As a first of its kind, The Gamer Hour celebrates the convergence of traditional sports, music, comedy, and acting with esports and gaming. If you enjoy hearing about celebrities that have grown up with gaming, and who lead interesting busy lives, The Gamer Hour is a must-see and share show,” said Mark Thimmig, chairman, CEO of Esportz Network.

The Gamer Hour, which is filmed at the iconic New York City Times Square Reuters studio and produced by Reuters Broadcast Solutions and Esportz Network, is available globally on Fite.TV, (https://www.fite.tv/vl/p/esportz-network/), and more than 50 media distribution platforms.

The Gamer Hour, airing on Tuesdays at 6 p.m. PT., features interviews with celebrities from traditional sports, musicians, comedians, and movie stars that enjoy gaming. This show was designed to meet the ever-increasing demand for high-quality, fun, and compelling video-on-demand esports and gaming programming.

Fans can view the show and follow upcoming guests and showtimes on The Gamer Hour website and through social media.

Those interested in becoming a show sponsor for The Gamer Hour, appearing as a show guest, or investing please reach out to Esportz Network at info@esportznetwork.com.
ABOUT Esportz Entertainment Corp.

Esportz Entertainment Corp. is located at the epicenter of esports, surrounded by hundreds of the greatest names in game development, arenas, tournament play, and those who drive the global esports industry. Esportz Entertainment Corp. through its Esportz Network, (https://www.esportznetwork.com), one of the largest global esports news organizations with over 90 reporters, photographers, videographers around the world, and a Reuters global partner for esports, is covering esports leagues, teams, athletes, along with the people and the companies behind the sport in a manner that matches the excitement and rapid global growth of esports. Esportz Network is developing additional high-quality programming directed to the broader esports /gaming audience and communities.

Chicago.net is Available for Acquisition