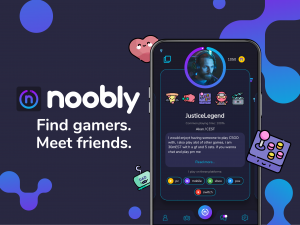 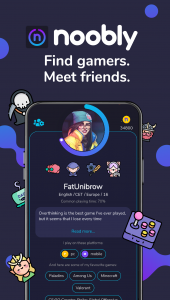 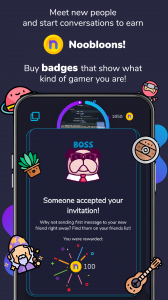 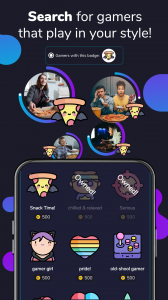 NEW YORK, NEW YORK, UNITED STATES, March 23, 2021 /EINPresswire.com/ — The developers of Noobly are pleased to announce the launch of its brand-new mobile app for gamers to find like-minded friends.

Noobly is a simple and intuitive Android and IOS app that aims to remedy the problem of loneliness video game players experience. While not a dating app by design, it allows users to search for gamer friends and build lasting relationships based on common interests. The ability for users to smoothly swipe through profiles and reward systems makes it a perfect platform for anyone who loves video games and needs a more one-on-one approach to interacting with other players – something that crowded public lobbies, random matchmaking, game forums, and chat rooms don’t typically offer.

To help users find perfect gaming partners, Noobly has a system of badges that represent individual gaming styles (for example: “I play to relax” or “I train to win championships”), user interests (“I love to read books,” “I’m a designer”) and status (“gamer dad/mom”) to match with people who have something in common, aside from their passion for video games. Badges can be obtained as rewards for initiating contact with other users, making it a game that you users win simply by meeting other players.

Thanks to the built-in gaming time indicator (seen as a ring around every profile picture), users can quickly match with other players who have a similar daily schedule and who spend similar¬¬¬ hours of the day on gaming. This is important, as recurring gaming sessions can help create a lasting connection between the two players.

“My theory behind this app is that we are humans first, gamers second,” says Jacob Stachecki, solo designer and developer behind Noobly. “We have lives, hobbies, interests and stories to share. There is plenty to talk about during in-game grind or while in a lobby, yet this often gets trivialized, as if you were just your character and skill level. Why not treat playing (and winning) games not as a goal in itself, but as an environment for humans to meet, interact and relate? This is the ultimate mission of Noobly.”

Noobly is a social app designed to help like-minded gamers find each other to share their epic gaming moments, battles, wins, loses, grinds, chillouts, and journeys to build lasting relationships. The company believes that no matter where users are located in the world, similar gamers and platform users can find one another to create the perfect team, crew, alliance, or even a pair of rivals.