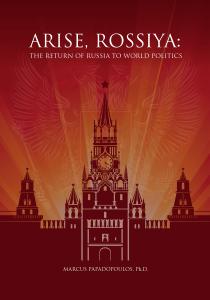 BEVERLY HILLS, CALIFORNIA, USA, March 29, 2021 /EINPresswire.com/ — Arise, Rossiya: The Return of Russia to World Politics by Marcus Papadopoulos Ph.D. is a leading expert on Russia as an analyst on contemporary Russian affairs. He also specializes in Serbia and the former Yugoslavia and is an analyst in matters relating to Syria, Iran, international relations in general and British politics. Marcus earned his Bachelor of Arts degree in Law and Modern History at London Guildhall University; a Masters degree in Modern History at Royal Holloway, University of London; and received a Ph.D. in 20th century Russian history. His academic paper on Russophobia for the International Likhachov Scientific Conference, and his speech at the House of Lords on the origins of the current tension between America and Russia, received significant media coverage. Marcus is a member of the Parliamentary Press Gallery of the United Kingdom, in his capacity as publisher and editor of Politics First.

During the celebrations in Washington, in April of 1999, to commemorate NATO’s fiftieth anniversary, at a time when Serbia was being mercilessly bombed, speeches were made by the then American president, Bill Clinton, in which, essentially, he declared that “…the bloc would intervene wherever and whenever it chose to.” NATO, in prosecuting a bombing campaign against Serbia, violated its own founding treaty, the U.N Charter, the Helsinki Final Act and the Geneva Convention is a fact that neither politicians nor journalists in America or in Britain wish to talk about because it is an inconvenient truth which sheds a very different light on how the military bloc represents itself through its propaganda.