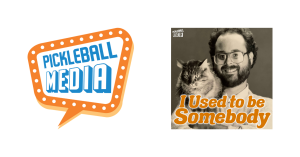 I Used to Be Somebody

Pickleball Media Launches “I Used to Be Somebody” Podcast

SACRAMENTO, CALIFORNIA, UNITED STATES, March 23, 2021 /EINPresswire.com/ — I Used to Be Somebody, a new weekly podcast for the “un-retired”, launched in mid-September. Host Carl Landau interviews entrepreneurs, executives, and creatives about how they built a successful (un)retirement. 22 Episodes and counting have already been produced.

Produced by Pickleball Media, I Used to Be Somebody is for Boomers charting their “second act” rather than a traditional retirement. This podcast isn’t your typical “Life After Retirement” advice — instead, it features stories from first-time entrepreneurs launching their first company in their 60s and former executives reconnecting with their passion after a high-powered career. And it’s FUN (after all, this is the first podcast ever produced from a Tiki Bar!)

Retirement in 2020 looks totally different than it did for previous generations:

● The Boomer market is exploding—70 million retirees in the U.S. and 10,000 new retirees daily (that’s 300,000 a month!) It’s a $27 trillion dollar business.
● Today, 51% of aspiring entrepreneurs are Baby Boomers.
● Growing online entrepreneurship–nearly 1 in 5 people who remain working past age 65 are self-employed.

Why the Pickleball name? When not podcasting, Landau loves playing pickleball, the fastest growing sport in the U.S.A. Introductory video: https://bit.ly/3gV8ogp

Carl Landau is Pickleball Media’s Creative Genius and host of I Used to be Somebody. He started his first magazine at age 26 and launched 4 successful media companies. (Carl also had 15 minutes of fame in the 1980s with his “Buy An Ad, Get a Cat” ad.)

Equine Collaborative International, Monty Roberts, & Others Team Up in Webinar Series to Provide Scholarships for Youth