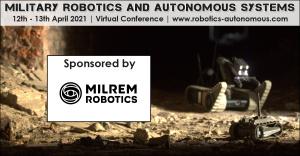 SMi Group reports: The Chairman of Milrem Robotics’ Supervisory Board is set to give an exclusive technical briefing at the virtual event this April.

Registration is closing soon. For those interested in attending the conference, it is only £499 for military and government personnel, and £999 for commercial organisations. Register at http://www.robotics-autonomous.com/milrempr.

iMUGS or the Integrated Modular Unmanned Ground System is a 32,6 MEUR project funded from the European Commission’s European Defence Industrial Development Programme (EDIDP). Its goal is to develop a standard European unmanned ground system (EUGS). The EUGS will be based on Milrem Robotics’ THeMIS unmanned ground vehicle and a specific list of payloads.

The THeMIS has already been acquired by eleven countries, seven of which are members of NATO: the US, the UK, Germany, Norway, France, Estonia and the Netherlands, whose Royal Army is Milrem Robotics’ key customer with six purchased systems.

The THeMIS has proven itself in Mali during the French lead counter-terrorism operation Barkhane where it was deployed for 12 months. During the deployment, the THeMIS traversed 1200 km in one of the world’s harshest terrains of lava rock soil and climates climbing to 50 degrees Celsius in the shade. The UGV was operational for over 330 hours.

At the conference, Gen (Ret) Riho Terras, Chairman of Milrem Robotics’ Supervisory Board will be presenting the development project.
“Europe must act quickly and develop, standardize and implement disruptive technologies to close the technological gap emerging between us and our adversary’s,” Terras said.

The requirements for the EUGS have been set by seven EU member states: Estonia, the leader of the project, Belgium, Finland, France, Germany, Latvia, and Spain.

Milrem Robotics is the European leading robotics and autonomous systems developer. The company has two offices in Estonia, one in Sweden and Finland and shortly one in the Netherlands.

The event brochure is available to download at http://www.robotics-autonomous.com/milrempr.

—-END—-
About SMi Group: Established since 1993, the SMi Group is a global event-production company that specializes in Business-to-Business Conferences, Workshops, Masterclasses and online Communities. We create and deliver events in the Defence, Security, Energy, Utilities, Finance and Pharmaceutical industries. We pride ourselves on having access to the world’s most forward-thinking opinion leaders and visionaries, allowing us to bring our communities together to Learn, Engage, Share and Network. More information can be found at http://www.smi-online.co.uk

Tekie to Small Businesses Post-COVID: Survival is about Modernizing your Technology

How to apply for AILET?