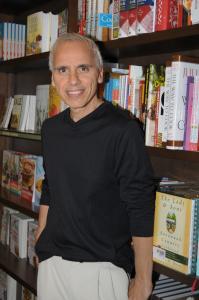 Herbie J Pilato is a pop culture icon and his years of experience as a book author, television talk show host and performer put him in a class by itself.”
— Lee Sobel, Lee Sobel Literary Agency

LOS ANGELES, CALIFORNIA, UNITED STATES, March 23, 2021 /EINPresswire.com/ — Writer/producer/TV personality Herbie J Pilato has inked deals to pen biographies of legendary actors Sean Connery and Diana Rigg, and a combined book about the equally iconic producers/directors George Lucas and Steven Spielberg and their blockbusting influence in Hollywood and with movie-going audiences around the world.

Repped by the Lee Sobel Literary Agency and attorney Gregory Tanner of the Tanner Firm, Pilato is the author of the critically-acclaimed, top-selling celebrity bios Twitch Upon a Star: The Bewitched Life and Career of Elizabeth Montgomery, and Mary: The Mary Tyler Moore Story, among several other successful media tie-in tomes. He also hosts Then Again with Herbie J Pilato, a retro-geared TV talk show now streaming on Amazon Prime and Amazon Prime TV, and distributed by Shout! Factory TV. Pilato, too, serves as one of the show’s executive producers with Joel Eisenberg and Steven Hillard of Council Tree Productions, with Lorie Girsh Eisenberg as producer.

According to Pilato, “Sean Connery will always be known as the first and best James Bond and left behind a spectacularly complex legacy. From Diana Rigg’s ground-breaking debut on TV’s ‘The Avengers’ in the 1960s to her regal, fierce presence on ‘Game of Thrones,’ the prolific actress made her own indelible mark in popular culture. And George Lucas and Steven Spielberg continue to impact the world of blockbuster entertainment in immeasurable ways, particularly in the sci-fi/fantasy/adventure sector. I will explore the extraordinary lives and careers of each of these remarkable individuals with the utmost honesty and dignity that they and the reader deserve.”

Says Tanner, “Due to his vast and respected experience throughout the entertainment and publishing industries, Herbie J Pilato is uniquely positioned to develop and deliver projects of the highest quality and literary merit.”

“This feels historic,” adds Sobel. “I signed Herbie J Pilato in October 2020 and by January 2021 I closed three-book deals for him. He’s dedicated. He loves pop-culture. He’s professional. I’m both honored and delighted to have him as my client. His work and his work ethic speak for themselves.”

Demand for Data Privacy Management Software Will Remain Strong, Driven by Expanding Regulatory and Data Management Requirements, According to IDC