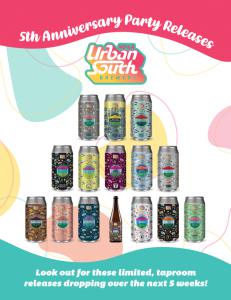 We are so excited to share this achievement with our team, our fans and some of our favorite craft breweries.”
— Jacob Landry, Urban South Brewery

NEW ORLEANS, LOUISIANA, USA, March 30, 2021 /EINPresswire.com/ — Founded in 2016, Urban South Brewery is celebrating five years of good beer in New Orleans and beyond this April. In honor of its anniversary, the craft brewery is bringing the beer festival directly to fans with fifteen different collaborative beers from breweries around the world that will be released over the span of five weeks. The first anniversary beer release will take place on Friday, April 2.

“We are so excited to share this achievement with our team, our fans and some of our favorite craft breweries,” said Jacob Landry, Co-Founder of Urban South Brewery. “While our fifth year of business was certainly not what we expected, it did highlight the power of collaboration and the significance of small businesses working together during difficult times. Because celebrations look a little different this year, we couldn’t think of a better way to honor this year’s anniversary than to share it with our brewery comrades, and we look forward to offering fans no less than 15 new beers in the weeks to come.”

In five years, Urban South Brewery has grown its volume by 800 percent, making it one of the fastest growing breweries in the United States. Additional accomplishments from Urban South’s fifth year of operation include:
– Released more than 200 unique beers ranging from heavily fruited sours to double IPAs and packaged more than 4.8 million cans in 2020.
– Won four awards in beer competitions including the U.S. Open Beverage Championship, the Great American Beer Festival and the Beer Army Awards.
– Launched the Coastal Harmony relief collaboration, a collaborative beer initiative designed to raise funds and awareness for hurricane relief in Southeast Texas and Southwest Louisiana.
– Amid a nationwide shortage, pivoted to produce over 120,000 bottles of hand sanitizer for local government, hospitals, grocery stores, nursing homes and other small businesses. The brewery also donated hand sanitizer to more than 150 public schools in Louisiana.
– Expanded its distribution footprint into Northern Louisiana, the Mississippi Gulf Coast region and Tennessee.

Anniversary beers will be available to order online for pickup or for in-person purchase at the New Orleans taprom while supplies last.

For the most up to date information on anniversary releases, follow along on Instagram (@urbansouthbeer) or visit UrbanSouthBrewery.com/5th-anniversary.

About Urban South Brewery
Founded in 2016, Urban South Brewery inspires community and fellowship through the gospel of good beer. With deep roots in Louisiana and a new satellite location in Texas, Urban South – HTX, the award-winning brewery is making its mark in the beer industry. Recent accolades include: 2020 U.S. Open Beverage Championship (Silver), 2020 Great American Beer Festival (Gold), 2020 Beer Army Awards (Gold and Silver), 2019 U.S. Beer Open Championships (Silver), 2019 Best of Craft Beer Awards (Bronze), and 2019 Beer Army Awards (Gold and Silver). Urban South prides itself on being a strong community partner, and – with a belief that beer is a family affair – the brewery features a family-friendly taproom. For more information, visit www.UrbanSouthBrewery.com and follow on Instagram, Facebook and Twitter for all of the latest information on events and new releases. @urbansouthbeer @urbansouth_htx