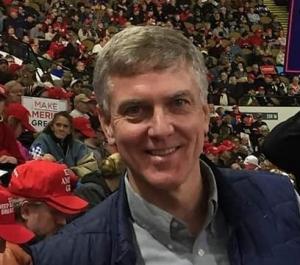 Grassroots key to a Marter win

WASHINGTON, D.C., UNITED STATES, March 23, 2021 /EINPresswire.com/ — James Marter has unfinished business with Adam Kinzinger and he’s been building grassroots support for years now, ever since he ran against Kinzinger in the 2018 primary.

“Talking with Illinois voters, they no longer look at politics like a sporting event. The Left’s radical agenda threatens everything from freedom of speech to the viability of their businesses,” says Marter. “It’s a life and death struggle, literally, as politicians like Kinzinger infringe on our 2nd Amendment rights, fund global abortions and spend away our children’s future, skyrocketing our debt. He’s been doing that ever since he went to Washington. This is what I warned people about and many more are listening now.”

Marter explains there are more threats than just RINOs (Republicans in Name Only). He calls them “unicorns,” and admits it may sound funny, but the grassroots aren’t laughing. He’s referring to fictional Republicans, created by money and media, to win a race, but not to fight for the American people. Marter confidently points to the disparity between the actual voters on one side, and the D.C. Consultant Class and “media echo chamber” on the other.

“Illinois is dead last in a lot of things, and it’s not because of Republican policies. We don’t want to spread this failure nationwide by sending Adam back. We also don’t want someone foisted upon us, who’s too inexperienced to fix things. Neither media hype nor “leftist lite” will accomplish great things for America,” says Marter.

A Marter election holds the promise of proactively advancing conservative principles. “I have more than a commercial; I have a record. I’ve spent years analyzing the issues. Send me to Congress and you’ll have one less politician to worry about, drowning in the swamp or doing the other party’s bidding. Instead, you’ll have someone you can trust, who’s a principled, competent fighter. That’s what continues to build my grassroots support and if you want to join the fight, visit Marter4Congress.US and get involved. Right now is the time.“

James Marter, a Purdue University graduate, is a small business owner of a professional ERP software and consulting company with a national and international practice and 34 years of experience. He is a life-long Republican and Chairman of the Kendall County, Illinois GOP.

For questions or to set up interviews with James Marter, email his Media Relations Director at Press@Marter4Congress.US or contact the campaign at (815) 585-8006.